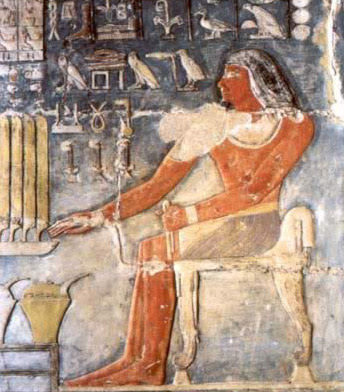 During the reign of Teti and Pepi I in the early part of the Old Kingdom's 6th Dynasty, Mehu was "Chief Justic and Vizier". He was married to Iku, who's titles included "King's daughter of His Body". His two other wives were Nebt and Nefertkawes. He was buried in a tomb at Saqqara, discovered by an Egyptian archaeologist named Zaki Saad, within the Sector of the Pyramid of Unas north of the Unas causeway and east of the mastaba of Princess Idut. The tomb was later excavated by Salam Hussein in 1940.
This tomb, which features four rooms decorated with some of the most colorful and exquisite reliefs in the whole Saqqara necropolis, is almost precisely aligned east-west, with the entrance facing east. It was only recently restored by the Egyptian Antiquities Organization.
At the entrance to the tomb, Mehu is depicted on either side of the doorway, A short passage leads from there into a small room with scenes of hunting and fishing in the swamps. On the southern left hand wall we find depictions showing the trapping of birds with nets, mending the nets and preparing food for the birds. On the eastern wall are reliefs depicting birds in their nests. 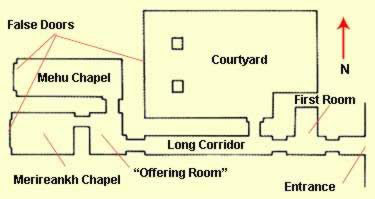 After this initial room, a short passage leads to a long, straight corridor running west. On its entrance are four registers showing scenes of baking, brewing and preparing birds for a meal on the left, while a man carrying a calf is on the right. Down the entire length of this corridor are representations illustrating daily life, including harvesting, fishing with nets, freight ships and sailing boats and metalworking. Shortly into this passage, a doorway on the north, or right side of the corridor communicates with a large courtyard that includes two square pillars at its western end. On each face of the pillars are depictions of Mehu. Other walls of the courtyard are adorned with scenes of offerings and gardening, and at the rear, western end of the courtyard behind the pillars is a false door dedicated to Mehu's son, Kahotep. 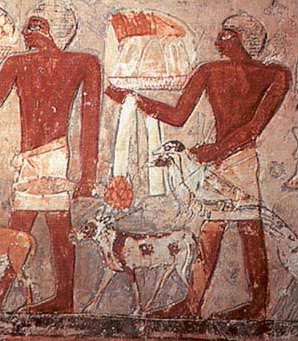 At the western end of the long corridor above the doorway are scenes depicting people picking fruit. To either side other men bring offerings to the tomb owner. Other beautifully preserved scenes in some unusual colors depict offerings such as a bull, an oryx and gazelles, as well as baskets full of fruit. From here, a short passage leads into an "offering" room where many more offerings are depicted, as well as scenes of musicians, including four harpists, dancers and clappers. 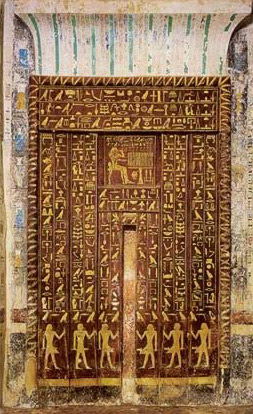 This small room communicates with two additional rooms from its northern and western walls. The doorway to the right (north) leads into a long chapel for mehu's offerings. Here, on the western wall is Mehu's beautifully preserved false door. It has an unusual style of decoration in which the limestone of the stela shows through dark red paint, which was used to simulate granite, highlighting the hieroglyphic text in yellow. This results in a wonderfully detailed piece of craftsmanship. The false door features a stela in a niche depicting the tomb owner eating from the offerings, and along the whole bottom of the false door are images of the standing tomb owner with his name.
Elsewhere in this chapel, the walls are painted with a rich blue-gray background and from these spring colorful reliefs depicting many more offerings, particularly birds, with priests and offering lists. On the south wall of this room, some of the offering bearers wear collars decorated with lotus flowers. One carries a boat-shaped basket with fruit, while others carry or lead gazelles, ibex and an oryx. This scene is paralleled on the north wall by men bringing geese and storks to Mehu. All of the offering bearers stride in the direction of the false door. Mehu is shown before a table to receives these offerings. 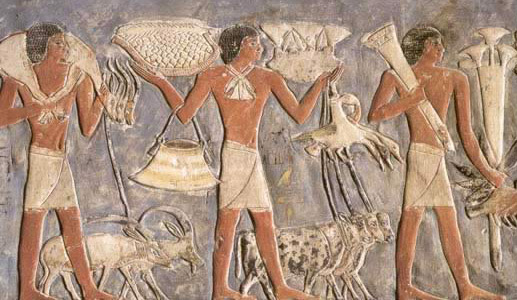 Above: Offering bearers with gazelles, an ibex, an oryx and various other items including fruitBelow: Offering bearers with geese and storks for Mehu
The second room leading off to the west of the small "offering" room and south of Mehu's larger chapel is a second, smaller chapel dedicated to Merireankh Meryre-ankh), an official who held the title, "Supervisor of Prophets for the Pyramid of Pepi I". Apparently, Mehu usurped this tomb from its original owner, leaving only the offering chapel of this official intact. It retains scenes of offerings, offering bearers and a false door stela.
The Tomb of Mehu at Saqqara in Egypt
Publicado por hispano-3000 en martes, agosto 26, 2014